I personally do not think that there is a wrong time of year for cinnamon rolls. But going into Fall is an exceptionally great time for cinnamon rolls! With all of my recipes I try to make them easy, pretty guilt free, and with few ingredients. This recipe is no exception! My husband’s daughter is starting to dabble in the world of baking. She made my Heavenly Vanilla Cupcakes and got excited about how easy they are. When I told her I was playing around with a new way to make cinnamon rolls she wanted to try them, so I knew that they had to be special… fool proof!

Being a high school student she doesn’t have a whole lot of time to mess with complicated recipes. And if I think back to doing homework, a quick snack, is the best snack. This recipes makes two cinnamon rolls, 3 if you don’t mind them being a little smaller, and doesn’t require any rise time because there isn’t any yeast in the recipe. To actually make the recipe it only takes about 10 minutes and cook time is around 15 to 20 minutes.

The dough consists of flour, sparkling water, baking powder, salt, and sweetener. (I used Truvia, but you could use sugar… or leave it out if you like. It doesn’t distract from the quality, just adds to the taste) I had seen a couple of sparkling water and flour unleavened bread recipes floating around the internet and so I thought why not add a few extra ingredients, and make them cinnamon rolls! It is pretty sticky when you first stir all the ingredients together, and because we are depending on the sparkling water, and baking powder, the quicker the dough gets worked and in the oven, the better the turn out will be.

The amount of extra flour on the working surface to knead, and spread out the dough, depends on the stickiness of the dough. The dough can be flattened out as soon as enough flour is kneaded in to keep it from being sticky when it is spread out. (I used my hands instead of a rolling pin) If you keep working it, you can work it back into a sticky mess, and the more you work it, the tougher the dough will get. Approximately 1/8 – ¼ cup of extra flour can be needed.

The easiest way to get the filling done quickly is to let the butter sit out in a dish while you are making the dough. Once the dough is spread out the butter, Truvia, brown sugar, and cinnamon can be whipped together in seconds to create the gooey cinnamon roll filling we all know and love so well. 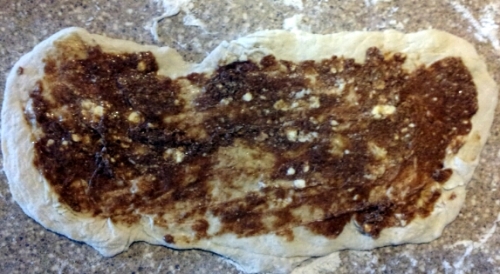 I have made these quite a few times and there really isn’t any screwing them up! The first time I put them on a cookie sheet side by side and they turned out fine. After that I put them side by side in a mini loaf pan and perfection was created. (This is where cutting them into 3 would snuggle them in there just right) I do think that in the pan they were a little moister on the inside. I have topped them with butter before cooking, and cooked them without, it didn’t make a difference. THIS RECIPE WILL NOT BROWN! That’s not a bad thing, and you will never know once you frost them, but don’t keep them in the oven hoping they will brown because you will have two cinnamon flavored rocks when you are done.

I know that a lot of people like cream cheese frosting on their cinnamon rolls, and find it to be an indulgent treat, but these guys just didn’t need it. I made the first batch with cream cheese frosting and was not impressed. From then on I’ve done a simple powdered sugar and butter frosting and it is perfect! The two may not seem like they are going to blend, but if you stir past the crumbly stage it will whip into a nice firm, creamy, buttery, yummy, decadence that these cinnamon rolls are worthy of!

So, no matter what your skill level is when it comes to baking this recipe is for you. If you are in a pinch for time, this recipe is for you. Need an indulgent snack, or dessert, that tastes like it is bolstering 400 calories, but only has 169 per roll, this is for you! Now, I’ve mentioned before that some of my recipes, while they are healthier than original recipes, and lower in calories, you still have to use some self-control. You can still look at yourself in the mirror after eating both rolls, but this recipe only has two rolls for a reason. 😉 Sit back, relax, and enjoy!

Combine flour, baking powder, Truvia, and salt in a bowl. Pour in sparkling water (It will foam a little) and stir with a spoon, it will be sticky!

Dump out onto a floured surface and knead just until the dough is no longer stick, flip over, and spread out with your fingers into an oval/rectangle. (Do not over knead, it will get sticky again and wind up tough)

Once the dough is spread out whip together the filling of softened butter, Truvia, brown sugar, and cinnamon. Spread across the dough, it will make a thin layer. Roll loosely from one of the short ends.

Cut the dough into 2 or 3 rolls depending on your personal preference. Either place side by side in the prepared loaf pan, or side by side on a baking sheet.

Cook for 15-20 minutes until the rolls are firm. Remember, they will not brown.

Remove the cinnamon rolls from the oven and after a few minutes transfer to a dish and let cool for about 10 minutes. While the rolls are still warm combine the powdered sugar and butter to make a frosting. Stir past the crumbly stage until it is creamy and spread over the top of the rolls. It will melt slightly creating a glaze.

Serve, or enjoy by yourself!

8 thoughts on “No Yeast? No Problem! – Fool Proof Cinnamon Rolls”